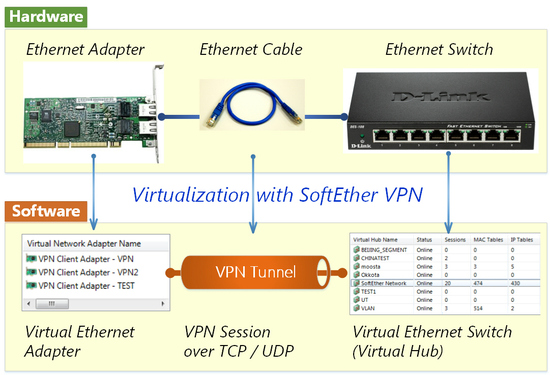 You can create one or many Virtual Hub with SoftEther VPN on your server computer. This server computer will become a VPN server, which accepts VPN connection requests from VPN client computers.

You can create one or many Virtual Network Adapter with SoftEther VPN on your client computer. This client computer will become a VPN client, which establishes a VPN connections to the Virtual Hub on the VPN server. 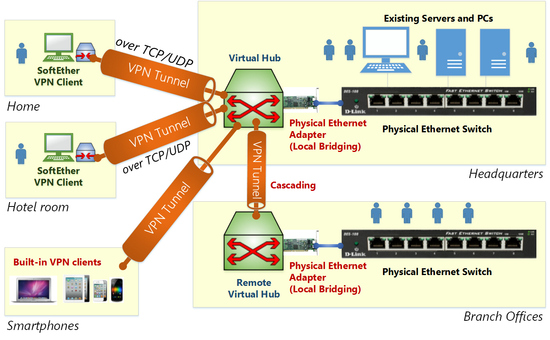 The Virtual Hub exchanges all Ethernet packets from each connected VPN session to other connected sessions. The behavior is same to traditional Ethernet switches. The Virtual Hub has a FDB (forwarding database) to optimize the transmission of Ethernet frames.

SoftEther VPN can also establish a VPN session over UDP. The UDP-mode of SoftEther VPN supports NAT traversal. The NAT traversal function allows the VPN server behind existing NATs or firewalls to accept incoming VPN sessions. You need no network administrator’s special permission before setting up a VPN server on the company network behind firewalls or NATs. Additionally, SoftEther VPN Server may be placed on the dynamic IP address environment since SoftEther VPN has built-in Dynamic DNS (DDNS) function.

Popular Question: What is the advantage of SoftEther VPN to OpenVPN?

Obviously, OpenVPN is an excellent tool. However, the development of OpenVPN has been stalled for many years. And as you know OpenVPN has no significant improvement in recent years.

The SoftEther VPN Project believes that SoftEther VPN has the potential ability to occupy the even stronger position in today’s OpenVPN.

How to Use SoftEther VPN ?

SoftEther VPN is an essential infrastructure to build-up IT systems on enterprises and small-businesses.